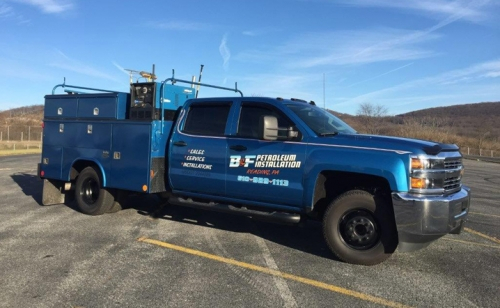 Please click on our Products and Services tab above to see all that we offer and can help you with.

B&F Petroleum's beginning started in the early 80's. Prior to starting B&F Steve Baer had worked for a local petroleum company for a little over 8 years before starting his own venture of being a businessman. Steve and a colleague had formed B&F as they saw a need for a complete and well rounded company to meet the demands of the industry. Steve later took full ownership of the business and forged forward. B&F now supplies and installs Petroleum Storage Tanks, Diesel Exhaust Fluid Tanks (DEF), Lubrication Systems, Oil Water Separators, Canopies, Air Compressor Systems, Remediation of Petroleum Products and Contaminated Soils, Water Treatment Tanks, as well as performing Inspections and Emergency Response for Petroleum Spills.

Steve had a drive to succeed which is carried on through each employee today. Through hard work, acquiring certifications, forming relationships with local, state and federal officials including L&I as well as DEP, mentoring employees and a caring attitude is what makes B&F Petroleum what it is today. Realizing there was a true need for businesses and homeowners alike to have a person such as Steve to guide them through the maze of regulations and paperwork is what pushed Steve along early on, and is still a driving force. It formed a strong foundation to B&F Petroleum. As B&F continues to grow Steve continued to stay at the forefront of technology and regulations within the petroleum industry. Steve forged well rounded relationships with some large key businesses to maintain a continuous stream of new work and service work, while still taking on small jobs from homeowners. B&F now has numerous crews to handle all your petroleum needs. It does not matter what time of the year it is. Our crews will be out there working in the snow and the blazing sun to complete your project on time.

As Steve grew the business, his son Jared grew as well. Jared grew up realizing that his father worked long, hard hours and was not always home. Jared reconized his father was building a solid future for him and everyone that works at B&F. Jared works by his fathers side as well as running his own crews and managing projects now. In 2016 Jared celebrated his 20th year working with his father at B&F Petroleum. Jared has continued to forge relationships of his own with key businesses, which adds to the full compliment of businesses that B&F Petroleum works for. Check out the Commercial and Industrial section under Products and Services for a partial list of companies we do work for, and let us show you what we can do for your business.

Steve and Jared have no problem spending time in the cold and snow working on jobs as they are avid hunters. With all the hard work comes some time to to play. Steve and Jared enjoy going out to hunt and spend time with Jared's children. Their offices show their efforts of work and play with pictures of the kids, certifications as well as many mounts. The love of hunting has born a new apparel logo. Look for our additional B&F antlered logo on our shirts, hoodies and hats.

B&F is set, and eager to complete your project no matter of its size at one or all your facilities.